There were so many things that fell into place when we were getting ready to move to Clayton Lake. When Evan’s name was drawn for the 2013 Maine Moose Lottery, we were ecstatic. When we checked the zone and saw that he would be hunting out of Clayton Lake, it was almost laughable. Call it luck? He has ridiculous luck. A little story about his luck….our first week here in Clayton Lake we went fishing at Bissonnette bridge. His line ended up breaking and he lost his good lure. A week later we went back…and he CAUGHT the line he had lost and saved the lure. Only Evan.

I hope my boys will both get to shoot one of their own someday…and maybe me too! 🙂

Evan’s brother came in to help call the moose and get him out.

Now is the part where I come in. I have been cooking Evan’s wild game for years. He is a natural born killer. Seriously, through and through. Before he became a game warden…his fall seasons were spent AWAY. So it was a pretty easy transition into warden life, he is still going to be gone all fall seasons. He’ll just be getting paid now! 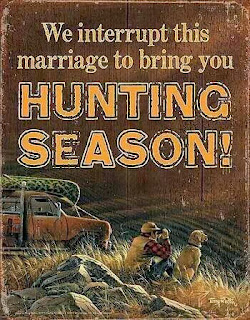 This basically says it all. I grew up in a hunting friendly family. But nothing could prepare me for this man’s obsession. I always had a major crush on Davy Crockett so really, it all worked out perfectly!!!

This might sound so so silly…but there is nothing I love more than seeing the look on my husband’s face when I have taken an animal that he has killed and turned it into an awesome meal. There’s something so awesome about knowing that the meat you’re about to eat came from a gorgeous animal who lived just down the road. The animal lived a natural life, living off the land with no human intervention. When it was killed, it was in it’s own habitat. It felt no fear or panic while walking up a ramp at a slaughterhouse awaiting the stun gun. Evan met the butcher face to face. The meat was put in one freezer before it was put in ours. It wasn’t transported to a store and put on a shelf. It is the purest way to consume an animal. The only thing shameful about the situation was how the bull looked on the back of the truck riding out to meet the butchers. He should’ve had a glorious ride fit for a king on his drive out the Reality road. But instead…..he got this.

We never ate a lot of wild game in my house growing up. I still have a lot of learning left to do, but I’ve been able to figure out what I can do with it to mask whatever game flavor is left. Some people may enjoy that wild flavor, but I do not. This is the first moose we have ever had and in my opinion, it certainly has the most mild game flavor when compared with bear and deer. Very exciting. 🙂

I made these Asian pot stickers the other night. This is one of my favorite dishes to eat. I found the recipe on the Food Network website and replaced the ground chicken with ground moose meat! http://m.foodnetwork.com/recipes/22747

Moose burger with the shallots, ginger, and garlic

Peanut mixture in with the burger

I ate mine over thinly sliced green cabbage and scallions. It made for a perfect little salad!

I grew up in Downeast Maine but have recently relocated to the North Woods. I live in Clayton Lake where I am a stay at home Mom to two beautifully wild little boys and wife to a Maine State Game Warden. I am a lover of the simple things in life...a good book, a song, a rainy day, a bowl of white popcorn, etc. I have a slight obsession with all things food. Love cooking it, eating it, looking at it, smelling it, reading about it, etc. I am a firm believer that life is what you make it.

Check out my personal blog

Seniors Not Acting Their Age

This blog has been archived

This blog has been archived and is no longer being updated.